I recently had the chance of meeting a guy named Jay, who had taken some photographs of birds.  After photographing the birds, Jay realized that the images were too grainy and not very sharp.  So Jay asked me what he could do to save the images.

Jay had the kindness to show me some of his work shortly after we talked about the photos in question.  His other examples were crisp, sharp photographs of wildlife.  He was shooting with a Sigma 50-500mm f/4.5-6.3 APO DG OS HSM telephoto zoom – a strong performer where Sigma telephoto lenses are concerned.

Hindsight, as they say, is 20-20.  And even though we all know it, you should prepare yourself adequately before going out into the field.  Not only should you be thinking about gear, but also how you will take photographs as you see them.

Knowing how to react makes you a better photographer.  The answer doesn’t have to be all about the technology.  This image was taken using the poor man’s macro technique.

A lot of our photography education seems to be centered around the technology, and I’m all for some of that.  But another part of our education should be how to react in given situations.

Jay did right by packing a 50-500 mm lens.  For wildlife photography, you can’t get much better.  And the f/4.5-5.6 wasn’t amiss because he was shooting in broad daylight.  But there are some extra things Jay could have done to improve his shots while he was photographing.

First off, image sharpness and telephoto lenses have a rocky relationship.  A lot of times photographers see sample images online and think This lens took these pictures!, while what they should be thinking is that the lens, coupled with some other key factors like stabilization, light, and distance, probably contributed a great deal to the resulting image quality, as well.

Taken with a Tamron 55-200 mm manual focus lens, without a tripod.  It helped that I laid in the grass to take this.

Another pitfall for those of a technical inclination is to buy into the idea of image stabilization (in the lens Jay was using, this corresponds to Sigma’s OS designation – optical stabilization).  I won’t bore you to death with the science of it, but suffice to say that image stabilization (IS) is a combination of moving glass, motors, sensors, and springs, that attempts to cut down on lens vibration.  It handheld situations, IS can be incredibly useful.  With a tripod, IS is actually counterproductive, and result in not-so-sharp or even downright blurry images.

If you’re shooting as Jay was, turn off IS (most lenses have a switch for this), and use stabilization.  If you have a tripod, use it.  If you don’t have a tripod, use anything.  Use a rock or a tree, a fence post, a park bench, even the roof of your car.  Put sturdy items beneath the lens (like a bipod on a machine gun) to increase your angle without losing stabilization.  These are tricks I’ve used that actually work folks.  Gear can be a great help, but you should never find yourself limited by it.

Secondly, you need light.  This can be tricky, and when it comes to image sharpness and telephoto lenses, it is usually a trade off.  After you’ve brought your shutter speed down as low as you can reasonably go, and after you’ve selected the minimum aperture, your only option left is to jack up the ISO.  Doing so can result in noisier images, so knowing your camera well – and it’s tolerances will go a long way here.

Thirdly, alter the distance.  Photographers the world over have been blessed with things called legs that actually pre-date the zoom lens.

But let’s face it – even though the manufacturers want you to drool over that 500 mm lens, the 500 mm focal length within it’s zoom range is probably not the focal length for optimal sharpness.  Every lens has an optimal focal length – a “sweet spot” – where things just seem better.  There are people out there who test lenses for this.  Go find them.  They will love the fact that someone actually cares.

At any rate, getting closer in can be a challenge.  Too close and you’ve spooked the wildlife.  How do you go about it?  Photography – especially wildlife photography – is very akin to hunting.  You have to take your time, and you have to be intelligent about it.  Move slowly, move quietly.  If an animal is looking at you, don’t approach it.  If an animal has reacted once to your movements, don’t approach it.  And if at all possible, stay upwind from the animal you want to shoot.  These tricks can help you photograph something without spooking it.

Okay, so you’re not a big game hunter, and it is pretty difficult to stay upwind from birds.  I’ll admit these things.  What I won’t admit is that there isn’t a solution to the problem of being too far away.

On the technical side of things, there are ungodly zoom lenses that you can buy, provided you have money to spend on them.  Or you can look into converters for your lens, although they do decrease image sharpness all on their own, and exponentially if more than one is used.

Another option?  Old, manual-focus prime lenses that were made for film lenses.  With these puppies, image sharpness and telephoto lenses seem to go hand in hand.  Some will mount with your digital camera and some will not.  Some may even meter with your camera, but most (the vast majority) will never auto focus on your camera.  Gearheads may not want to hear about the advantages of using old glass and throwing all the modern gimmicks out the window, but I’m approaching this from a tried-and-true standpoint, and this particular remedy is easy, cheap, and effective.  Can’t get any closer to your subject?  Crop in post-production.  You’ll still get incredibly sharp results, even if it is considered “wrong” by most photography forums out there.

But what can Jay do now that the moment to photograph these birds is gone?

Software exists – with varying opinions about its effectiveness – that can remove some grain from photos and sharpen them up a bit.  Does this the troubles with image sharpness and telephoto lenses are over?  I doubt it.  Software companies love to show you testimonials of great experiences, but there are usually people with lackluster experiences too.

Another alternative is finding a digital lab that retouch your files.  Such places do exist, though I have never used them and cannot speak of their performance.

Sharper Images Tip #2: Use a Cable Release or Remote

If you have your camera set up on a tripod, when you push the shutter button to take a photo, you sometimes inadvertently create some unnecessary movement on the camera.  It may not be much . . . but if you’re using a tripod, shouldn’t you eliminate camera shake? 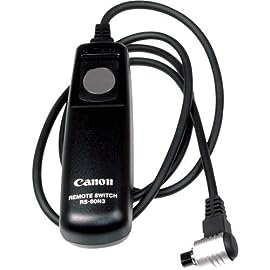 The Canon RS-80N3 Remote Switch works with most Canon DSLRs.

The solution?  Attach a cable release (also called a “remote switch”) to your DSLR.  You can then press the button on the end of the cable release, not the shutter on the camera, and get rid of camera shake. 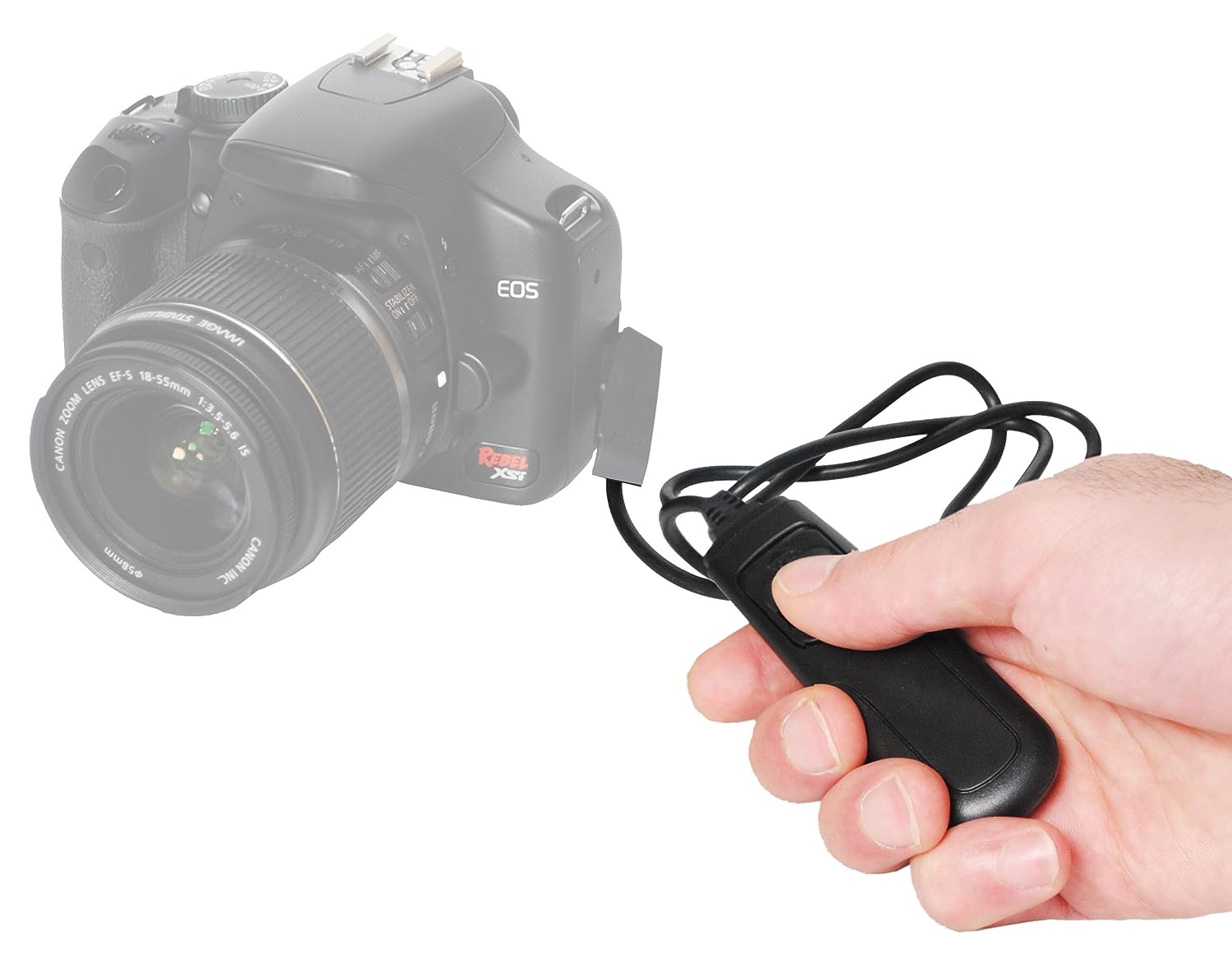 The Bower RCMUNI Remote includes 6 adapters that will work on almost any DSLR, including those from Canon, Nikon, Pentax and Olympus.

If you don’t have a DSLR or don’t want to carry around a wired remote, you can also get a very inexpensive wireless remote. 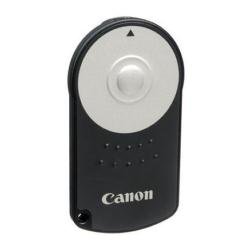 The Canon RC6 Wireless Remote works with most Canon DSLRs as well as with many Canon Point and Shoots.

The Self Timer setting on your camera doubles as a wireless remote setting.  Many wireless remotes such as the Canon RC6 allow for both instant shooting and a 2 second delay.

Just point the remote at the camera and the takes the picture!

How to Take Better Photos: Sharper Images Tip #1: Use a Tripod!

Everyone from casual photographers to pros want their photos to be sharp and in focus.  You’ll even hear people talk of photos—and often the lenses that take them—of being “tack sharp.”  Other than spending lots of money on lenses, how do you get sharper shots?  Here is the first of several tips on improving image sharpness:

The single most important piece of gear you need beyond your camera is a tripod, and shooting on a tripod will make the most dramatic improvement in image sharpness.

In fact, if there’s one thing that separates amateurs from pros it’s that pros shoot on tripods always—even during the day.

The simple idea is that tripods keep the camera steady.  Even a small amount of camera shake can affect the sharpness of an image, especially when shooting at slower shutter speeds (e.g., slower than 1/125 second).

But many also forget that the focal point can change if you mistakenly move further away or closer to your subject, and a tripod helps prevent this.  Preventing movements in and out of focus is particularly significant when shooting at low apertures or in macro settings.

Most entry-level tripods are single-piece units, possibly with a removable “quick release” plate, which allows you to take the camera off of the tripod easily.  But such systems typically are not very sturdy–that’s why they’re cheap!  Higher end systems come with separate tripod legs and a ball head, which allows for greater control of the camera and a much steadier setup.

Like many things, you get what you pay for.  You can get a working tripod for less than $50, but don’t expect it to hold up in the wind or to last very long. 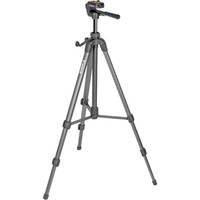 Still, such tripods are a great way to get a feel for tripods.  H and B Digital sells the Canon Deluxe Tripod 300 for $39.95. 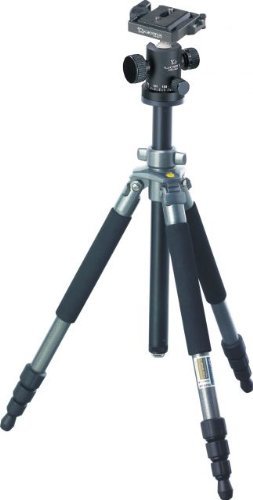 But want to get a great tripod that will last for many years?  Consider the Giottos MT9250 MT II Classic Aluminum tripod.  The MT9250 will support equipment up to 11 pounds and folds down to 24 inches.  The MT9250 is available at H and B Digital with the excellent MH1001-652 ballhead (quick release plate included) for $245.99.