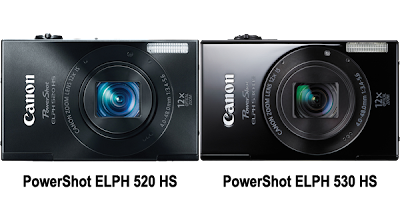 From the front view, the Canon PowerShot ELPH 520 HS and 530 HS are hard to tell a part. Both have a slim, clean profile and modern design. They were easy to hold while shooting and they fit comfortably in my jacket pocket while I was testing them around the city. In addition to their appearance, both cameras come with a rechargeable lithium-ion battery and require a Micro SDXC memory card to store stills/videos.

Not only do these cameras have a similar exterior, but internally, they share many key features as well.   Both the ELPH 520 HS and the ELPH 530 HS come with a 10.1 megapixel CMOS sensor, a 12x optical zoom 28mm wide angle lens and Smart AUTO mode.

More similarities between the ELPH 520 HS and the ELPH 530 HS include, a DIGIC 5 Image Processor, Full 1080p HD Video with Stereo Sound, Smart AUTO, Intelligent IS, Face ID and a variety of Shooting/Special Scene Modes. Below are some sample images taken with both digital cameras using various shooting and special scene modes.

I mixed and matched modes using the 520 HS and the 530 HS, some of the modes I used with both cameras while other modes I tried with one but not the other. I also didn’t shoot with EVERY mode that these cameras are capable of shooting, but I do give a decent selection.

Their numerous similarities can make it difficult to notice their differences at first glance. But the few features that do vary are well worth the $50 difference in price (the 520 HS retail price being $299.99 and the 530 HS being $349.99) depending on your lifestyle and what you’re looking for. 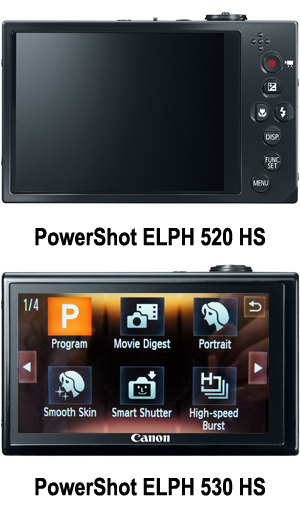 For example, the Canon ELPH 530 HS comes with built-in WiFi and a 3.2″ high res PureColor touchscreen LCD whereas the Canon ELPH 520 HS does not have built-in WiFi and comes with a 3.0″ high res PureColor LCD.
The Canon ELPH 530 HS built-in Wi-Fi allows you to wirelessly share your images and video through Canon iMAGE GATEWAY on Facebook, Twitter, and YouTube or to a PC. Your can upload virtually anywhere on your iPhone, iPad,or iPod Touch device with the free Canon CameraWindow app, and even share images between Wi-Fi enabled PowerShot cameras. Also, the 3.2-inch wide touch panel Pure Color System LCD offers intuitive operation, and Touch Shutter makes shooting easy (for some) and interactive.
After testing both, I have to admit, I prefer the non-touchscreen LCD over the touchscreen. But this is truly a matter of personal preference. I was never privy on the whole touchscreen business, unless the screen I’ll be touching is almost the size of my hand (like an iPad or KindleTouch) because I usually end up pressing the wrong buttons. But for those of you who already use mostly touchscreen devices or are just not as a clumsy with your fingers as I am, then the touchscreen can make getting around your camera and capturing images/videos faster and easier.

As far as the built-in WiFi goes, it is a feature that I think most point-and-shoots on the market would benefit from having nowadays. It is likely that if you are investing in an advanced point-and-shoot camera you would like to share the images and videos you capture with the rest of the world or at least your loved ones. A camera phone can work great for this but sometimes you want a device that’s primary functions are to record and capture the world around you. The built-in WiFi makes sharing these high-quality images and videos quickly and easily.
For many, having this built-in functionality is a deal breaker, but for me, personally, it isn’t necessary.  I’m the type of photographer who enjoys and prefers reviewing my photos before I publish them for other eyes to see. It’s likely I may never use the WiFi function if I owned the Canon PowerShot ELPH 530 HS, but having the option is always a plus.
While the image and video quality taken with both cameras are quite similar they are still nonetheless impressive. I also enjoyed experimenting with the various scene, shooting and special modes to enhance and add a creative flair to my work as well. Overall, both the Canon PowerShot ELPH 520 HS and the Canon PowerShot ELPH 530 HS are flexible and advanced compact cameras whose vast amount of similarities and slight amount of differences can help make your decision easier when choosing which one would be ideal for your personal needs and lifestyle.